Summer budget 2015: how will it impact small business? 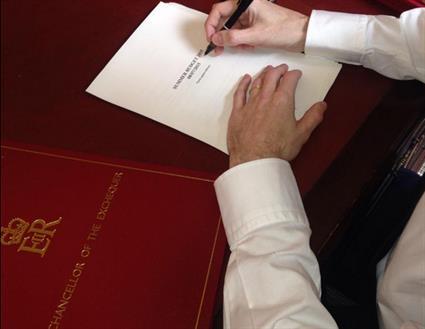 ‘It is a one nation budget, from a one nation government,’ the Chancellor proclaimed in parliament – and prior to the budget, George Osbourne claimed a key focus would be on business.

In the first Conservative-only budget in 18 years, George Osborne’s main gifts to small businesses were the promise to cut corporation tax to 19% by 2017, then down to 18% in 2020 and a rise in the annual investment allowance to £200,000 per year.

More broadly, the majority of the moves to decrease the budget deficit will come from cuts to the welfare budget and through cranking up the pressure on tax avoidance.

Below are the main aspects of the budget which will affect small businesses:

Bound to impact small businesses, the national living wage will rise next year to £7.20/hour and will be raised again in 2020 to £9. This led to a large cheer in parliament, with a celebratory fist-pump from Iain Duncan-Smith. However, the fact that this will only be applicable to those over the age of 25 suggests the impact will be limited.

Some are rather sceptical about the replacement of the National Minimum Wage with the National Living Wage. This was voiced by the New Statesman’s Stephen Bush:

‘The rise in the minimum wage to £7.20 is 65p short of the living wage today. The minimum wage is forecast to rise to that level by 2020 in any case. In reality what is being offered is a rebranded minium wage, not a real living wage.’

The Chancellor tried to placate businesses by saying that the cut in corporation tax would take away any hit that they’d feel from upping employee wages. Furthermore, there was also the mention that increasing Employment Allowance to £3,000 would help further.

The FSB (Federation of Small Business) were decidedly more cynical.

‘The increase in the Employment Allowance to £3000 is welcome although, for many small businesses, it is unlikely to fully off-set the increase in costs brought by the new over 25s National Living Wage rate’, they said in a statement.

There will also be ‘major changes’ to dividend taxes. The Chancellor claimed that around 85% of those with dividends will not pay more, or have their tax cut.

He also told Parliament that there would be a new tax-free dividend allowance up to £5,000. On the other hand, there will be higher taxes on dividend income stretching beyond this.

Finally, in 2016 tax-free personal allowance will be increased to £11,000, rising each year after that with inflation.

The Treasury said of the increase in tax on dividends above £5,000:

‘Combined with the increases the Government has made to the personal allowance and the introduction of the personal savings allowance [which allows interest on savings accounts to be paid tax-free], from April 2016 individuals will be able to receive up to £17,000 of income per annum tax-free.’

Annual investment allowance will increase to up to £200,000 a year, which Osborne claims will help small and medium-sized firms. The FSB agreed, commenting:

‘The Annual Investment Allowance has been an important incentive for people investing in the future growth and productivity of our small businesses.

It was a rather negative budget for young people  -  with the cancelling of the maintenance grant, the national living wage increase only applicable to over-25s, and the scrapping of automatic housing benefit to the jobless.

Osbourne's sweeping statement that, ‘The skills of the young are no higher than the skills of the old,’ is something that he aims to remedy with the introduction an apprenticeship levy. This is an attempt to piece together the so-called ‘productivity puzzle’, following figures last week showing an ‘absence of growth in productivity in the seven years since 2007’.

Businesses offering apprenticeships will gain more funding to do so and will see most of the benefits from it but it will not necessarily be applicable to all small businesses.

While agreeing that having an ‘increasing focus on vocational on-the-job training’ was positive for small business, the FSB warned against driving ‘for greater numbers at the expense of quality’:

‘While we welcome the exclusion of small firms from the proposed apprenticeship levy, we urge Government to talk further with businesses about the wider implications and implementation of the levy.’

There will be no change to fuel duty, which will remain frozen during the year. This will be a positive for small firms in rural areas who rely on their vehicles for their business.

While news outlets anticipated an increase in Sunday trading hours within the budget, there was no mention of them in the end.

The FSB claimed that it still ‘remained concerned’ over the potential harm that the extension would do to small businesses but called for action in other key areas,

‘As well as assessing the potential impact of these measures, the Government should be taking a wider holistic view to see what else can be done to support these businesses’, they said.

‘Bringing forward reforms to business rates is an immediate priority. We should also do more on liberalising licensing laws, easing planning restrictions and on improving customers’ access to parking. All are areas which are currently doing more to hold back the high street than Sunday trading.’

What Osborne failed to mention

Ever since the EU changed the rules pertaining to VAT on digital goods, small business owners have been up in arms over the negative effects it has or will have on them. This is due to the complexity of calculating the VAT rate depending on the country the buyer is in, rather than the seller.

HMRC set up the VAT MOSS online service to help small businesses comply with the new EU rules, but there was no mention of simplifying tax for small businesses any further in the budget. This is following calls earlier in the month for tax simplication.

‘Working out just what tax you owe can be a huge headache for small businesses. Getting it right costs unnecessary time and money’, the FSB said in a statement.

‘To deliver simplification, it is critical Ministers implement the recommendations the OTS has already made. Working with stakeholders, they also need to present a clear roadmap on how they will take simplification forward in the future. This should be done with a clear regard to boosting productivity and growth.’

Productivity was one of the most talked about points prior to the budget and while George Osborne attempted to show that the government were trying to combat the situation, many thought that what was said was not enough:

#Budget2015 provided too little detail on what the productivity plan contains, says @johnvanreenenhttp://t.co/CewO3q8yOF

Liz: We face endemic low pay & serious problems in productivity & growth. The Budget didn't do enough to deal with those issues. #Budget2015

And some were cynical about the outcome of the changes:

Can new UK #budget2015 really solve productivity puzzle (http://t.co/F9PoNuTVsv & comment) when leaders may not be tackling root cause.

So was it a positive budget for small business? The FSB consider it a ‘mixed bag’:

‘The Chancellor is right to continue to focus on reducing the budget deficit and has made some tough decisions to reach his goals. For businesses, the Budget contained a mixed bag of proposals, some of which will prove challenging for our members.’

If you enjoyed this article, sign up for a *free* BusinessesForSale.com account to receive the latest small business advice, features, videos and listings directly to your inbox!